The Center for Arts at the Armory is completed 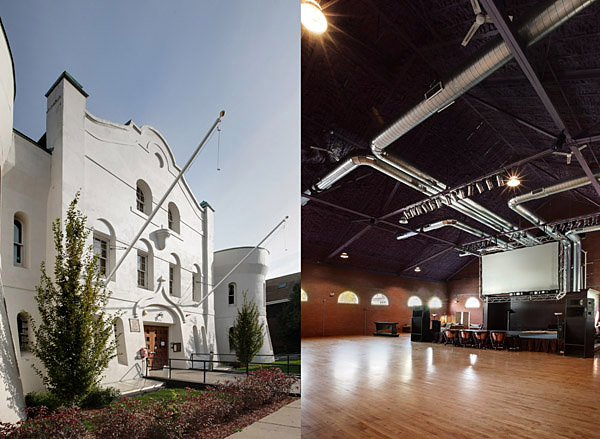 In terms of preservation strategies, armories are truly a difficult urban building type.  Once a place for military training, they are now becoming almost wholly obsolete:  Their vast interior drill hall and their monumental footprint makes them difficult to convert to any other urban program including housing.  Meanwhile, many of them appear on highly restrictive state or national historic registers.  This confounds developers further as surrounding land costs and thus development intensity has multiplied around these buildings but the restrictions placed on renovating them makes it impossible to increase their density and make the numbers work.

The Somerville Armory is one such building.  Nestled in an otherwise dense residential zone, it sat underutilized for years, slowly deteriorating.  After the building was courageously acquired by the Highland Avenue Trust, we worked with them, the Arts at the Armory, the City of Somerville, and the Massachusetts State Historical Commission to adaptively re-use the structure into a  regional, 30,000 sf non-profit arts center that houses a multitude of community oriented programs including NGO's, artists, dance, and music studios and offices, galleries, arts education and after school programs, and a cafe/performance space.  The building's anchor is the former drill hall which now serves as a multi-use space that host a variety of community programs, concerts, and educational venues.