The proposed plaza, park, and bridge hosts ceremonial and everyday events in a new mixed-use district for Ho Chi Minh City in Vietnam. Our project creates a kilometer long plaza, green in its physical presence, green in its construction and dynamically scalable to the events of the city. Floating above the entire plaza and bridge is a monumental pergola, a filigree of steel cables covered in flowering vines, the patterns of the openings creating an ever changing play of shadow and light. This unifying roof turns the plaza into a single super-scaled outdoor living room. At the same time, a panoply of differently scaled openings create a series of perceptual spaces of different sizes, intimate at the lake end and becoming progressively more grand as they approach the Saigon River.

As well as providing shade for the plaza, the urban scale canopy defines a multitude of programmatic activities and scales to animate the space around the clock. 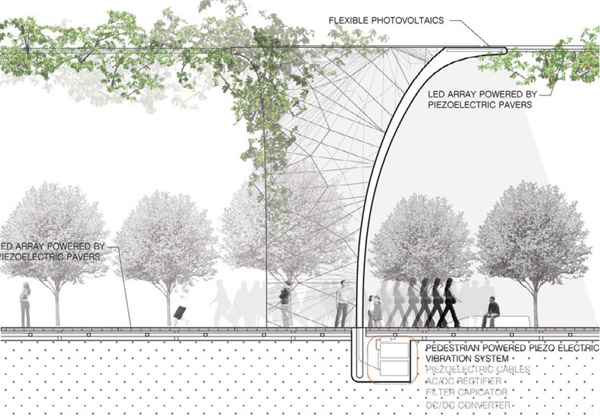 The canopy and paving work in conjunction as a new infrastructure:  Both overhead photo-voltaics in the canopy and under-foot Piezo-electric flooring generates energy which then powers the lighting and public wi-fi installed in the canopy.  Runoff water collected from the permeable paving is filtered and re-used for public restrooms and to drip irrigate the canopy vines.