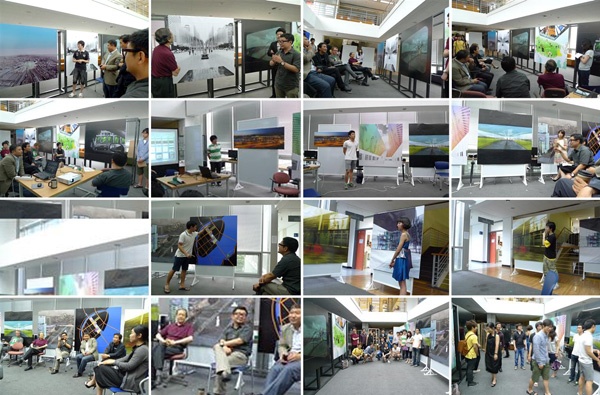 SNU students presented their final images for the 5-day ‘Light Monumentality’ workshop. Rather than the students initially explaining their intentions, in a pedagogical reversal we asked the critics to respond first by only reading into a single large scale image produced by each of the students. SNU Professors Kim Seung Hoy, Kim Jin Kyoon, Peter Ferretto, along with Prof. Choe Sangki from University of Seoul, and Park Yoonjin from Parkkim, quickly adjusted to the new situation, insightfully critiquing (and sometimes productively misreading) the student’s intentions. Only afterwards were the students allowed to present additional drawings and verbally respond.

The reversed exercise was not only a lot of fun for all participants, it also reflected one of the key concepts of the workshop: That in monumental architecture, the image many times precedes the specifics of the architectural resolution: The concepts of the image, whether fabricated or real, inevitably become merged and conflated with the actualities of the architectural form to the point that the reality of the space is only fully understood through its image.