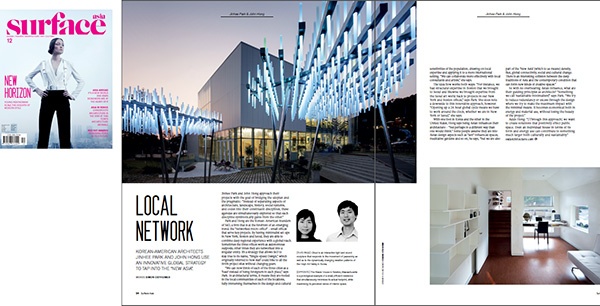 Thanks to Simon Ostheimer for featuring us in the April/May issue of Surface Asia in his story, ‘Local Network.’

Park and Hong are the Korean-American founders of SsD, a firm that is at the forefront of an emerging trend: the “networked micro-office” – small offices that serve key projects. By having minimalist set-ups in New York, Boston and Seoul, they are able to combine deep regional experience with a global reach. Sometimes the three offices work as autonomous outposts; other times they are networked into a singular entity. It’s a strategy that allows SsD to stay true to its name, “Single-speed Design,” which originally referred to how staff could bike to all the firm’s project sites without changing gears.

“We can now think of each of the three cities as a ‘base’ instead of being foreigners in each place,” says Park. In architectural terms, it means they are rooted in the local communities of each of the locations, fully immersing themselves in the design and cultural sensitivities of the population, drawing on local expertise and applying it to a more international setting. “We can collaborate more effectively with local consultants and artists,” she says.

The idea flow works both ways: “For instance, we had structural expertise in Boston that we brought to Seoul and likewise we brought expertise from the Seoul art world back to projects in our New York and Boston offices,” says Park. She does note a downside to this innovative approach, however. “Opening up a 24-hour global cycle means we have to work around the clock, whether we are in New York or Seoul,” she says.

With one foot in Korea and the other in the United States, Hong says being Asian influences their architecture – “but perhaps in a different way than one would think.” Some people assume they are into Asian design aspects such as “zen” influenced spaces, meditative gardens and so on, he says, “but we are also part of the ‘New Asia’ [which to us means] density, flux, global connectivity, social and cultural change. There is an interesting collision between the deep traditions of Asia and the contemporary condition that can form new kinds of creative spaces.”

So with no overbearing Asian influence, what are their guiding principles as architects? “Something we call ‘sustainable minimalism’,” says Park. “We try to reduce redundancy or excess through the design where we try to make the maximum impact with the minimal means. It becomes economical both in energy and material use, without losing the beauty of the project.” Adds Hong: “[Through this approach] we want to create solutions that positively effect public space. Even an individual house in terms of its form and energy use can contribute to something much larger both culturally and sustainably.”