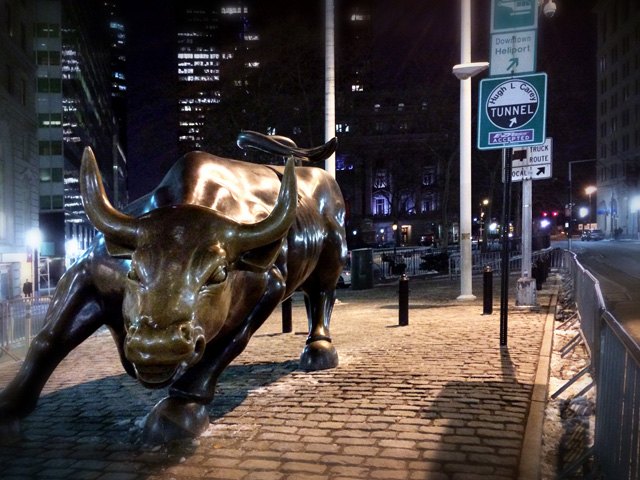 We just moved our New York office from the Garment District to the Financial District (right across from the ‘Bull’). Although our offices in Cambridge and Seoul remain in place, this particular relocation marks an exciting time for us: For a brief synopsis, our Songpa Micro-Housing project in Seoul is nearing completion, our Solar House in Lincoln, MA just broke ground, and our Artists Loft in Brooklyn is well under way. The move downtown is as much about an optimism for the immediate future as it is an economic opportunity. First of all, we have never been in an office building this nice (a landmarked gem on Broadway), with a price this good!

Light-heartedness aside, as we were deciding where to move it became apparent that the microcosm of Manhattan is a map of global power shifts. We were priced out of the recently burgeoning Garment District where landlords with new lobbies are raising rents by 150% and targeting tech startups to replace the garment makers that now outsource labor overseas. Meanwhile class-A office space in FiDi (the acronym is a cute attempt at rebranding the ‘Financial District’) is going for an unusual steal. The reason? The area has been hit with a triad of economic, ecological, and psychological forces: The social tensions stemming from Occupy Wall Street still exist, the recovery efforts of Hurricane Sandy are still ongoing behind the specter of globally rising tides, and the deep solemnity of the events of 911 will always blanket over the area beyond the jackhammers of memorial construction and petty politics.

Meanwhile, practices like ours and a slew of notable firms alike are now recently ‘occupying’ the hood creating gravity for a design culture that is innovating on social and aesthetic fronts. Just as our Cambridge and Seoul offices have built portfolios of locally engaged, globally aware projects, our hope for our new New York digs are also to address full-on the very forces that have caused the lull on Wall Street – this time not for the purposes of personal gain, but to create cultural, ecological, and economic value in our spaces and places.

Happy Holidays from SsD! The Academy and the Coffee Table