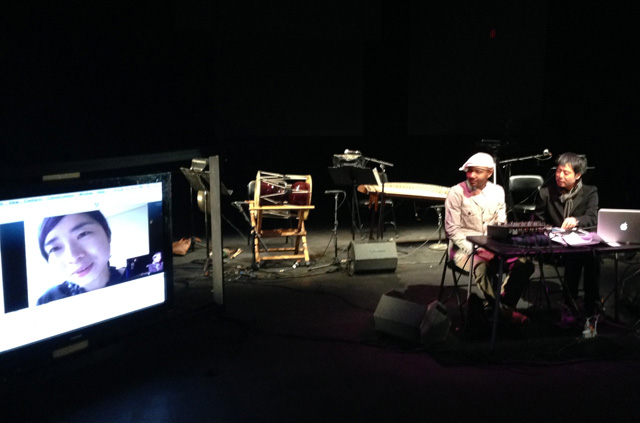 Jinhee and John in conversation with Paul Miller aka Dj Spooky at LaMama theater. Photo by Greg Chungwhan Park

Earlier last month we had the privilege to join Paul Miller, aka Dj Spooky in dialog as part of his Seoul Counterpoint performance at LaMama theater hosted by Culture Hub. During his highly productive residency at the Seoul Institute of the Arts, we found common themes in our respective work: In a recent interview, Paul found inspiration in our book, Convergent Flux and we have likewise drawn from his discussions of geo-politics in Asia. In his ‘Seoul Counterpoint,’ series, the importance of translation as a 21st century phenomenon is grappled with as a new creative space. Even with the apparent smoothness of digital communication, Paul’s provocative piece acknowledges and celebrates the paradox between actual and virtual closeness/distance between people, culture, and places.

Likewise in our book Convergent Flux, we define translation as not a lesser version of an original, but as a new, more compelling hybrid. Korean architecture and urbanism are put within the stream of global influences, in a powerfully productive dialog with its ‘counterparts.’ While influences including Korea’s unique topography, rapid economic acceleration, burgeoning urban density, and reinvention of infrastructure converge to create extraordinary results, the history of globalized modernity is given new momentum and meaning through our many curated examples.

In keeping with the theme of global translation, Jinhee Park beamed in real-time from Seoul during the performance. One of her key conjectures actually brought up the vast differences between New York and Seoul: The former being ethnically and culturally diverse but relatively uniform in its urban patterns, while in contrast Seoul is still relatively mono-cultural, but radically diverse urbanistically… Sounds like a great theme for further discussion!

The Academy and the Coffee Table SsD Goes Down Under